A PIONEER TECHNOLOGY
patented many years before exosomes 'explosion'

While the interest of the scientific community explodes for exosomes, Ciloa has already developed a pioneering technology for more than 15 years. Ciloa’s technology is based on the production of fully native membrane proteins on exosomes in a natural way by cells.

These nano-vesicles produced by cells have long remained mysterious after their discovery in 1983. In 1996, exosomes were shown to be involved in the immune system. In 2007, exosomes were described to play major roles in intercellular communications.

Robert MAMOUN understood since the early 2000s the high potential of a bio-drug development technology through exosomes.

Even before the explosion of interest in exosomes, the 2 Ciloa patents were filed in 2008 and 2009. Several years were necessary to reach a true technological maturity allowing the development of antibody drug candidates, where we are today.

CILOA’S HISTORY IS DEEPLY CONNECTED TO RESEARCHES ON EXOSOMES

Ciloa’s history began a long time before “exosome explosion”, as shown below (number of publications about exosomes per year – US National Library of Medicine, National Institutes of Health). 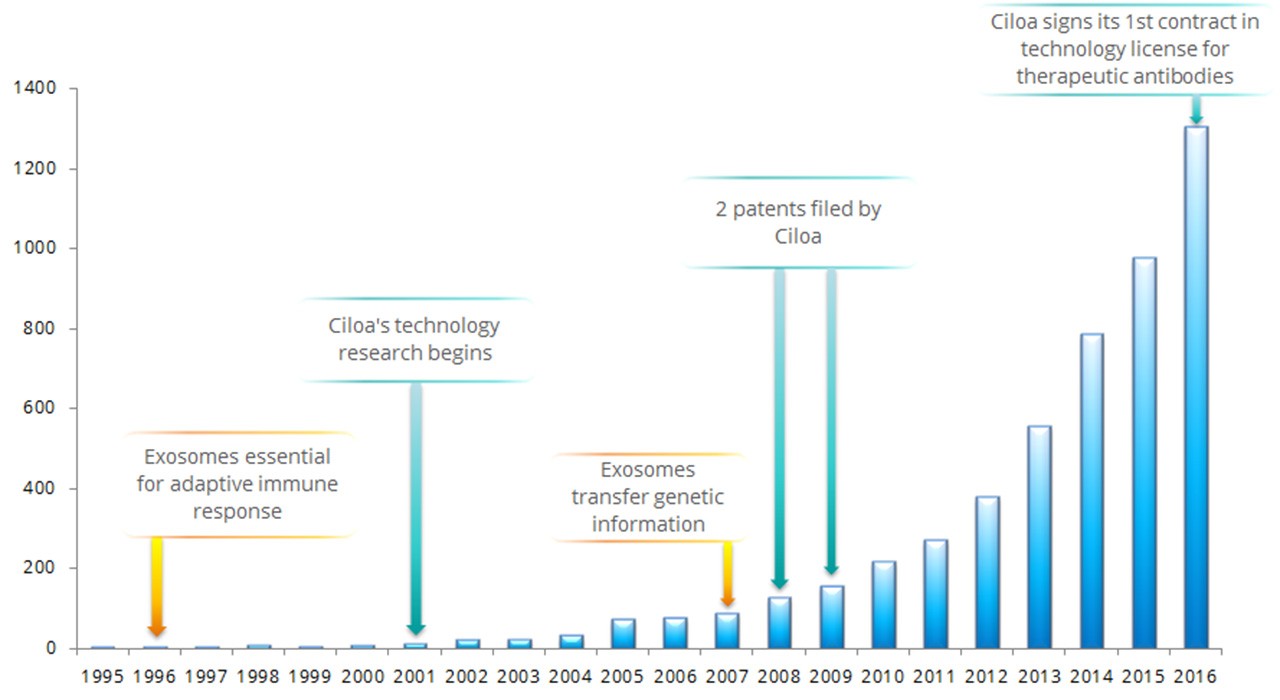 OUR HISTORY AND THAT OF EXOSOMES

Dr. Graça Raposo published her discovery that immune cells such as B lymphocytes secrete exosomes, and that these vesicles carry membrane-bound molecules essential for the adaptive immune response. (“Exosome Explosion” by Clotilde Théry | July 1, 2011)

Co-discoverers of patents, R. MAMOUN, M. VIDAL, and B. TRENTIN, began researches on what became Ciloa’s technology. Their goal was to develop an exosome-based vaccine technology.

A group led by Jan Lötvall in Sweden discovered messenger RNAs and miRNAs inside exosomes. Moreover, their in vitro experiments showed that these mRNAs are translated into proteins in target cells, providing the first demonstration of genetic information transfer by exosomes (“Exosome Explosion” by Clotilde Théry | July 1, 2011).

Extending the first patent, it allows to target not only membrane proteins to the surface but also cytosolic proteins inside the exosome. This patent opens the way to create a new generation of virus-free therapeutic vectors.

R. MAMOUN and B. TRENTIN  co-founded Ciloa to develop the exosome technology and  to produce fully native membrane proteins on exosomes. Located in Montpellier, France, the company is a spin-off of the CNRS and University of Montpellier.

Dr. R. Mamoun, CEO of Ciloa, presented at UBISTART Tour 2014 (JULY 10, 2014 – New York Academy of Sciences – NYC, USA). Ciloa was selected by the Galien Foundation and UBIFRANCE to present its disruptive “native membrane proteins on exosomes” technology that allows to develop a new generation of vaccines and antibodies.

This program aims to develop a new generation of vaccine candidates, the first exosome vaccine against the Chikungunya virus.

Application of Ciloa’s technology in Nature

Ciloa won the OSEO – MESR Award of the ‘Emergence’ national competition for the creation of innovative companies and was twice nominated in the ‘Creation-Development’ category.

In 2013, Ciloa won the Innovation Award.